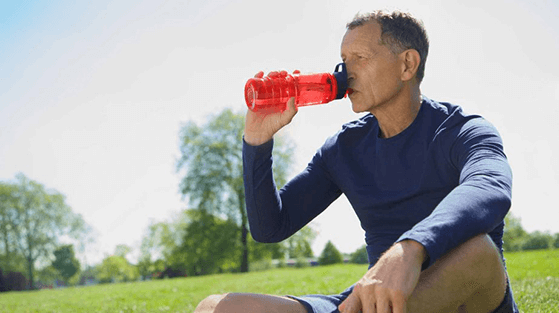 Though I’m duty bound to say that ALL pillars of the Grow Young program are essential to long-term glowing health and well-being there are two that are undeniably foundational, which is also why these are the first two you’ll encounter in the upcoming book. Well when it finally ekes its way out into the wider world you will!

First of these is diet, meaning what and how we eat as opposed to yet another potentially doomed weight loss fad. And the second is that inescapable chestnut of exercise and physical activity, and it’s this we’re going to be dealing with in these first posts of a brand new year. Yes the traditional period of ‘definitely-this-time’ resolution and hand-on-heart promises to (amongst doubtless myriad other self-improvements) get that butt off the couch and into the gym – a noble enough intention though one which is equally traditionally eclipsed by the guilt-laden training gear lying idle in your cupboard come Easter. What we’re going to tackle in this series is how to make your intended program both superbly effective and also how to make that change actually stick.

The questions on the topic of exercise that I hear surface time and again are not only about what to do, but also how much of it we should be doing and at what intensity to gain the most benefit, and you’ll see there’s some fantastically revealing research which shows these to be vitally important ones for us all to consider. However, before we tackle that particular minefield let’s all wind back a little here and consider two far more primary questions before we get to the how, what and how much.

And these guys are:

In my trademark ass-about-face style let’s have a quick poke at the latter of those because I honestly believe there’s only one good answer to this question regarding the endgame and that has to be …
… as far as possible and in as good shape as possible.

This might seem to be stating the obvious but all too often I see folk set out on a new project – and an upgraded (or spanking new) exercise program is simply bound to be yet another project for many of us – and jump in guns a’blazin’ and go all out for every exercise goal they can. Great to see the energy but this behavior is typically at best a recipe for burn-out and at worst the same for a whole load of harm. Having good clear goals is, as in most endeavors, super important but let’s ensure they’re realistic and also the most appropriate to our needs before we launch ourselves at them like lemmings off a cliff.

One of my earlier podcast guests, Chris Crowley of Younger Next Year fame, roundly espouses the use of what he calls kedges, meaning exercise related goals to help keep you focused, motivated and heading towards something positive on the horizon. And certainly having clear and realistic life goals is these days a well researched pathway to greater health and longevity but I want to drop in a caveat on this: If your aim is for optimal health and a very long use of this impeccable jumble of meat and bones, then firstly be very careful about long duration endurance goals. By these I mean the next marathon, Iron Man/Woman, Tough Mudder … whatever.

While this should seem somewhat self-obvious, the sheer amount of folk I’ve seen use the next big endurance event as their motivational exercise goal (or as Chris would put it a kedge) would seem to say otherwise. Sure it can serve in the short term to get your butt out there but just think for a minute or two about what hours and hours of pounding that body of yours over hill and down dale, day in, day out might be doing to all those precious moving parts. Thump thump on the knees. Thump thump on the vertebra. Ditto every other part of that precious biology of yours. And look, all exercise has a bit of wear and tear, but trust me some are almost all that and endurance training (and events) are undeniably one of them. I know there’s a lot of truth in the expression ‘use it or lose it’ but equally use it too much and in the wrong way and you may well lose it for good!

The well known health writer Mark Sisson of Primal Blueprint fame was himself a world ranked distance runner, triathlete and Ironman competitor (Mark even finished 4th in the 1982 Ironman World Championship) so knows a thing or two about the costs and has written and blogged at great length about the inherent problems with what he calls ‘chronic cardio’ as well as his own poor first hand experiences. I’ll touch on this more in the next post but suffice it to say in a cost/benefit analysis, endurance training sadly can and does land far more on the cost with scant little of the benefit in the long term.

This is not to say don’t do physical things for extended periods of time, but it is to say choose the type of activities you do (particularly those of long duration) wisely and in the next post I’m going to outline what you should be doing, how much of it and why.

Equally if your exercise goal is as quick as possible to look shredded, get a six pack, a beach body or win the New York marathon then hey … your choice! But trust me, there is more than one way to skin the physical perfection kitty and I’m going to suggest that if your aim is looking awesome, stacked or winning at any cost then like many before you, you may all-too-easily sacrifice long-term well-being and the full use of all your faculties for some short-term hotness. And this is also not to say you can’t have it all, but choose your goals and your route to them wisely and if you follow what I’m suggesting, then depending on how hard you work you certainly may well end up with both … just in a much more sustainable way.

And now we come to the first of the above questions which relates to our personal exercise and physical activity history. Why is this so important to consider? Because firstly whatever you’ve done physically before will help decide which rung on the ladder of optimal physical health you’re best to step onto next. But perhaps even more importantly your history will also inform which activities and how much of each you should be doing if you truly do want those twin goals of longevity and in as good shape as you possibly can.

So here’s an example: For many years in an early part of my life I was a dancer, initially naturally enough as a student but then later for a good decade and a half I traveled the globe as a jobbing pro. In my early days I even made it through a national ballet academy though later I worked in pretty well most areas of the industry. If you weren’t already aware training at that level is the same as any elite athletic endeavor – tough, exacting and highly competitive. For men the load on the body is enormous with jumping and spinning expected as part of a normal day’s work alongside carrying a fully grown adult woman about on one arm. If you ever think dance is for sissies then you try that with the wife when you get home big guy.

The toll is enormous and understandably becomes apparent around middle age and by their late 50’s many have already had knee surgery, hip replacements and spinal fusion at least. For someone with such a history you want to be very careful how you approach future training and I hope you can see now how endurance training with such a history is most likely to be a quick route to a walker or a wheel chair.

Choosing what we do has to consider what shape we’re in, how much wear we’ve already got and also what we’re hoping to achieve. Get clear on these and in the next post we can dig a whole lot more into specifics.

So that’s it for this week. As I’ve said more next week on what and how to go about this but if you keen to get started and I truly hope you already are, then go get yourself a copy of Chris’ Younger Next Year. In my opinion there is no better book on the market to help get you started. Oh and just for good measure … start slow.

Remember it’s a heck of a lot easier to build yourself up gently than it is to repair damage done in haste!