It’s been a little while since my last post and I wanted to make this first one of 2015 related very much to what I see as a defining quality, and for some perhaps it may even be the most defining quality, that our recently expired Xmas mega-experience seems to be all about. And no, sadly it’s not the baby Jesus nor is it presents, shopping, trees nor even the ‘bad joke’ Xmas crackers neither. Nope. C’mon, for a good many of us it’s all about the food. Like it or love it, this time of year seems to herald for most of us a chowdown marathon of truly imperial proportions, subsequently triggering a guilt-fed New Years resolution-fest and predictably enough it all ends up with a ‘cross-yer-heart-an-hope-to-die promise to never, ever, ever’ again cram that much past your taut but still willing lips. Really!

Having just recently landed from 2 ½ weeks in a fascinating and very beautiful albeit little known pocket of central Europe called Slovakia, I wanted to give you a flavour of what I experienced – no, hang on there … actually it’s far more accurate to say ‘what my stomach experienced’ – which to me also touches into a cultural aspect of food that most of us seem to have lost along the way to our purported convenience foody heaven. If you don’t know much about Slovakia then Google it but trust me it’s probably a good thing for the Slovaks. It’s a tiny little place made even tinier after it splintered off from the Czech Republic in 1993 but the Slovaks seem to have found a balance between a welcoming warmth and a proud nurturing of their own unique cultural assets, and none was more obvious to me over that time of celebration and gathering in than in the area of food.

One of the great and consistently observable correlations between disease and diet has been the concurrent rise of many of the more infamous diseases of mortality directly alongside the rise of a Westernised processed diet: CVD, obesity & it’s many mutant offspring as well as a whole bucketload of the cancers and this list does indeed go on. When convenience becomes one of the defining characteristics of the food culture then traditional foods and preparation seem to disappear right alongside that of our glowing good health. Of course it’s just a correlation but it’s such a consistent and profound one that we’d be fools to not heed the message, right?

And though both fast food and global supermarket giants have threaded their way throughout this little corner of the globe too, many of the Slovaks appear to also have held pretty steadfastly to areas of dietary tradition long lost in many other purportedly developed parts of this great blue planet. I simply couldn’t help but marvel at how many still continue to make everything from scratch right down to traditional Xmas sweets and candies. Here’s a sample of just a couple of the many Xmas goodies we were treated to both outside and at my partners family home. Sure most others were made with refined sugars but these beauties contained only lower GI coconut sugar. 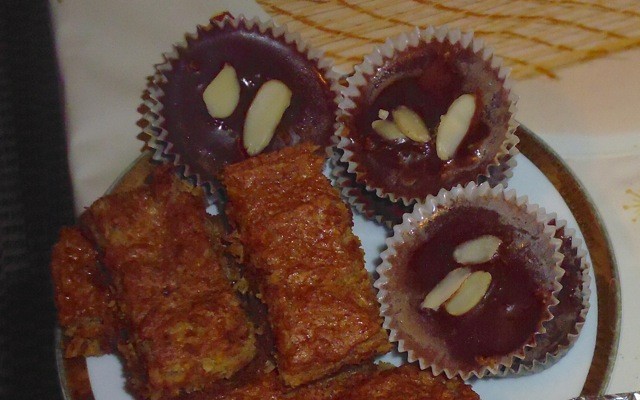 When we hit Bratislava for a few days to visit more family, we set out bright and sparky on the first morning to find a food market for breakfast supplies and were greeted by this terrific little find right down the road from where we were staying in the old town. 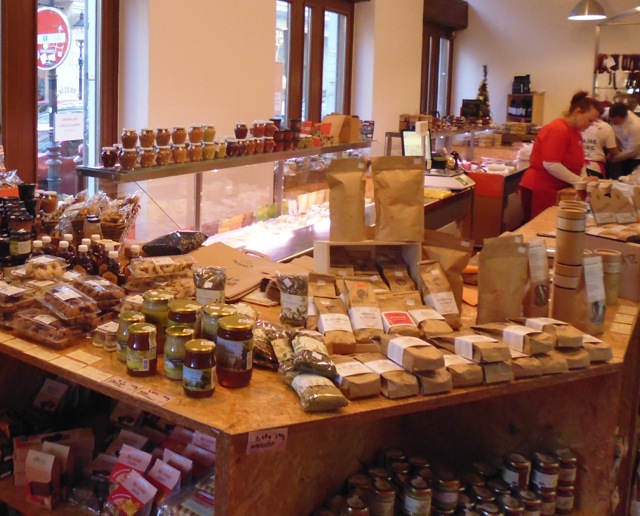 Actually raw dairy products are pretty easy to find all over Slovakia (as they are in a lot of continental Europe) mostly in the form of butter and cheeses but you wouldn’t have to go too far to find milk as well. We were given a couple of litres direct from the neighbours cow by a family member which was immediately employed to make tavaroh  (t-vaaa-ro), a fresh and very typical Slovak cheese, simple to make and absolutely delicious. And by Jove here it is, fresh on the stove. 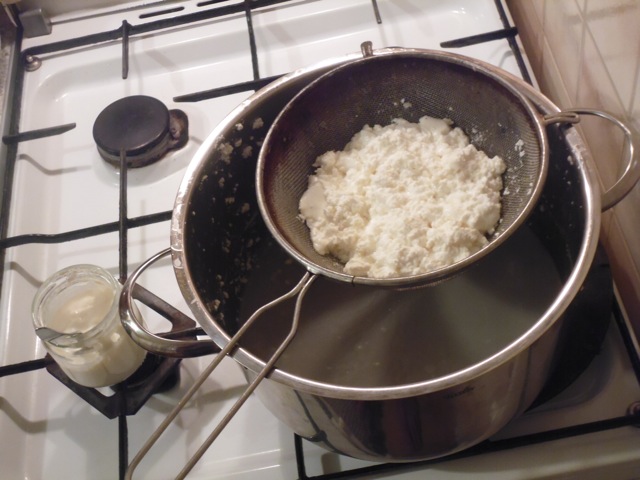 Homemade cheeses aren’t the all of it as well. Homemade & often also home-grown krauts, pickles and condiments were always on the menu (well at least with the family I’m connected they were!) and typically even the teas we drank and herbs in much of the food would all have been picked locally in the warmer months. 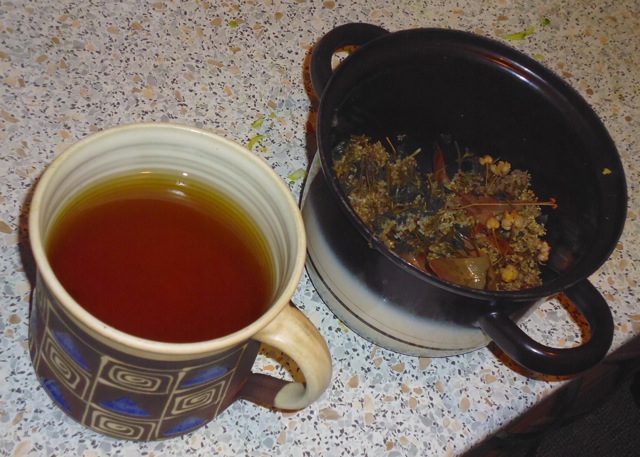 And this is a typical dinner made from venison shot by my partners uncle in the nearby hills, covered in a sauce using local picked mushrooms with a side of local cabbage & potato dumplings and all topped off with a sweet/sour local berry called brusnice (bruce-nit-za) – absolutely delicious and about as close from farm to table as you might hope to get. 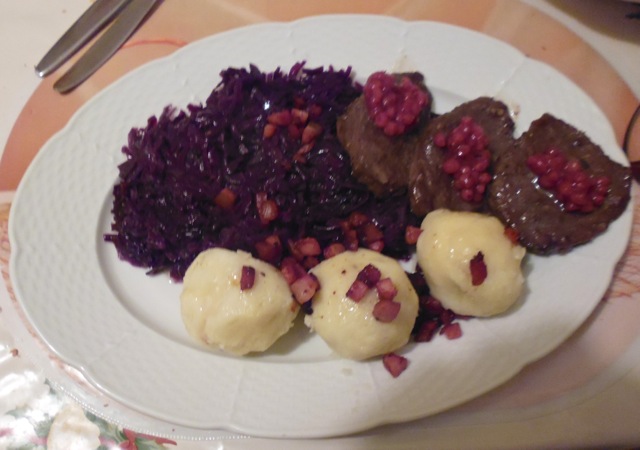 And yep this can just seem like a whole bunch of fancy-pants food bragging but for me it points more fully to the issue of what we’ve seemingly lost in the space of a generation in terms of freshness and health by the pact we all unwittingly made with the convenience food devil. As a kid in Australia in the 1960’s it was typical for people to grow at least some portion of their veggies and many would also have a few hens (we call them chooks) floating about the back yard for fresh eggs and the occasional roast. My grandma (like many others) had bananas, oranges, lemons, mangoes, mulberries, macadamia nuts and papaya just dropping off the trees. Sure you can’t grow that cornucopia everywhere on the planet but if they can grow and produce the above in icy little Slovakia it does beggar the question ‘What can you grow?’.

And it’s not just grow of course but it is as much to also ask ’What can you prepare?’ Since the ‘50’s when the food industry seemed to take over food preparation and even chopping, dicing and mashing from families themselves, we’ve mutely allowed our refrigerator contents to mutate from whole ingredients into fully-formed ready-to-eat products, the contents of which more often resemble some kind of bizarre formula for nuclear fission reaction rather than a wholesome assembly of Mother Nature’s goodies.

A central tenet of the Grow Young program rests firmly on a return to simpler food habits and a far shorter journey from farm to table and this is a sentiment echoed roundly these days from all quarters, well at least those interested in your health rather than the contents of your bank account.

The US food writer Michael Pollan pretty succinctly captured it by saying,

“Don’t eat anything your great-grandmother wouldn’t recognize as food.”

So I’m not going to badger on any more about this. If you’re inspired but find your internal dialogue going something like ‘ Well great but how the heck am I going to find the time to do that?’  The answer is simply:

Start where you can. Small, tiny changes make a difference. If you don’t know even how to cook or prepare food then same as above (meaning small steps). Ditto as well for ferments, pickles, preserves, jams & jellies. Find something you like and learn how to do it from scratch. One … simple … step … at … a … time!

If you want to learn how make super simple kraut then visit Sandorkraut’s interview where he tells you step by simple step.

And while on the topic of kraut, here just one more yummy thing to leave you with. This is a traditional Slovak sauerkraut soup served at Xmas called kapustnica (ka-poo-sni-tza) and it is jam packed with some incredible flavours and a surprisingly, delightful piquancy. If you ever get a chance to try some, do not pass this by! 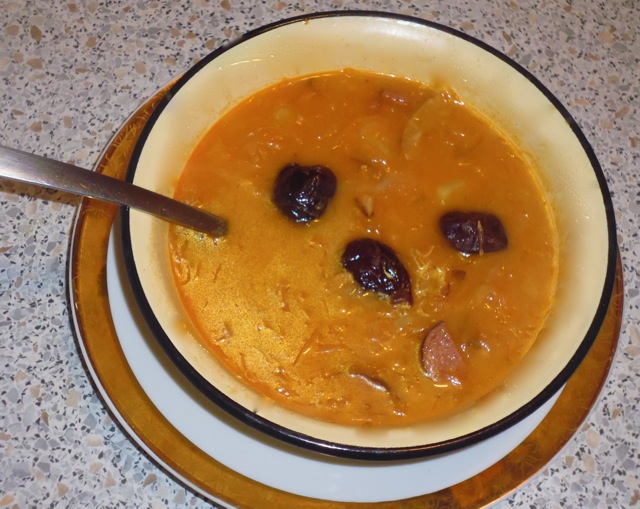 6 Comments on “a lost world”